Company insolvencies in Western Europe: slight lull being confirmed for 2015

In this first overview of company insolvencies in Europe, Coface examines the following question: Was the return to growth observed in Europe strong enough to bring about a lasting reduction in business failures? For 10 out of the 12 Western European countries studied, the answer is «yes».
With the help of an econometric model, Coface expects the number of company insolvencies to fall in ten countries by the end of 2015, in conjunction with our improved growth forecasts for the Eurozone, which is set to reach 1.5% in 2015 and 1.7% in 2016 against 0.9% in 2014. Activity will be supported by the fall in the oil price and in the euro, the gradual ending of restrictive fiscal policies and also of the Central Bank’s quantitative easing.
Spain, Portugal and the Netherlands, which could register falls respectively of 20%, 16% and 21% year on year, are among the leaders. The United Kingdom is not far behind (-10% forecast by the end of 2015), while in France (-3%) and in Germany (-2%) the improvement looks more muted.
Against this, certain countries stand out through an expected increase in business liquidations. This is particularly true for Italy and Norway with expected rises respectively of 7% and 6%. While the recovery has been too weak to be of benefit to businesses in Italy, Norway has been penalised by its dependence on oil, the price of which has plummeted by 60% since July 2014. 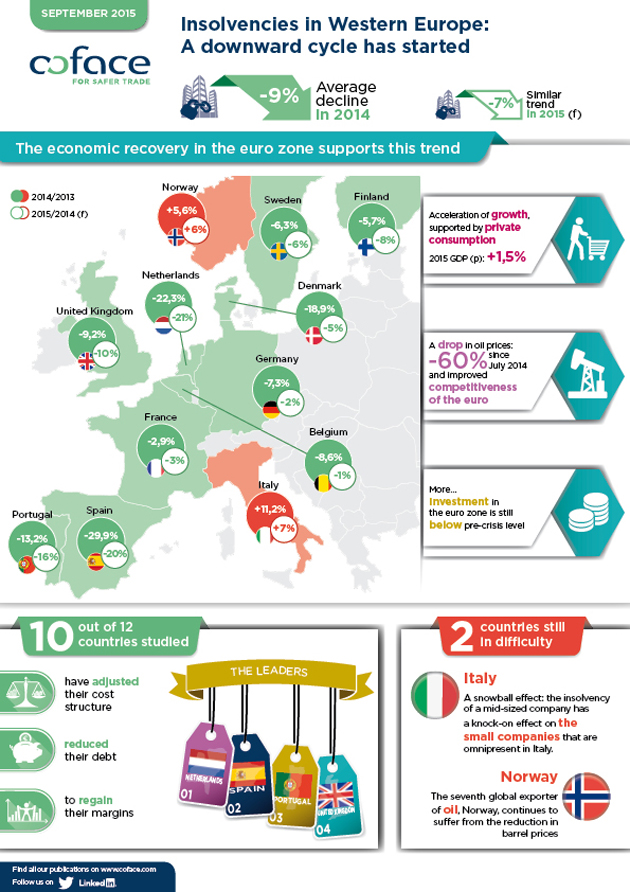