Rising sovereign spreads in the eurozone, increased protectionism, higher oil prices, capital outflows from major emerging countries: warning signals multiplied in the second quarter of 2018. Many of these provoke a feeling of déjà vu, evoking the 2012-13 period. At that time, the International Monetary Fund1 (IMF) stressed that the crisis in the euro area was still relevant, and that rising geopolitical tensions and their consequences on oil prices were among the main risks weighing on global growth. And, although the IMF reminded us that optimism was in order with regard to the American economy, the risks of falling back into recession (“double-dip”) after the brief 2010- 2011 lull made headlines in many countries throughout 2012.

World trade was struggling to recover, in part because of continued protectionist measures from 2009 onwards. A little over a year later, massive outfl ows of capital, following communications from the US Federal Reserve (Fed), were penalising some major emerging markets. Admittedly, this comparison is rapidly reaching its limits, as several of these signals are not exactly the same nowadays: the price of a barrel of Brent oil then was close to 110 US dollars (against only around USD 75 in the first half of June 2018), while, at 3%, the yield on a 10-year Italian government bond remains half that it was at the beginning of 2012.

However, these signals today confirm that we have passed the peak of global growth, and that corporate credit risk is increasing. In this increasingly hectic global environment, Coface has downgraded Italy’s country assessment (to A4). Argentina (C), Turkey (C), India (B), and Sri Lanka (C), have also been downgraded: these four emerging countries each have current account balances that have deteriorated over the past two years as a result of dynamic domestic demand and a higher energy bill. Combined with increasing internal political risks (to varying degrees), these external imbalances make them vulnerable to the recent rise in risk aversion and the trend towards capital outflows from emerging markets. On a more positive note, corporate credit risk is decreasing in Malaysia (A3) and Oman (B).

Rising oil prices are obviously related to these changes, and help explain the reclassification of the energy sector assessment in five countries. Finally, US protectionist announcements are a double-edged sword: although they have led Coface to downgrade the information and communication technologies sector in China and the metals sector in Canada, they have also led to an upgrade for the metals sector in the United States. These changes are part of the twenty sector assessment changes (eleven downgrades and nine upgrades) analysed in this barometer. 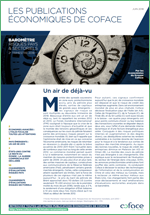