The total number of protectionist measures implemented worldwide exceeded 1 ,000 in 2018 and 2019 according to Global Trade Alert, about 40% more than in the previous three years. That said, “only” 23% of all protectionist measures taken between January 1, 2017 and November 15, 2019 were taken by the United States or China. Therefore, protectionism is not exclusive to the world’s two largest economies and the so-called “phase-one” deal to pause the trade war between them is unlikely to be sufficient to put an end to uncertainties related to trade tensions, which cut global GDP growth by around a quarter of a percentage point in 2019. Hence, Coface expects a pursuit of the global economic slowdown in 2020, with global GDP growth forecasted at 2.4%, down from 2.5% the previous year. Coface expects global trade growth to remain weak in 2020 (only +0.8% in volume terms), following a decline by 0.3% in Q3 2019 year-on-year, i.e. the slowest pace since the great crisis of 2008-2009.

Conversely, export-oriented economies, such as Germany (only 0.5% GDP growth expected in 2020), are hit hard by international trade contraction. International trade challenges are expected to continue to have a negative impact on products that are very integrated into the global economy, such as in the automotive or the metals sectors. The metals sector, notably steel activity, is often viewed as a barometer of global activity due to its use in several industrial activities, including construction, the automotive industry and consumer goods such as household appliances. It has recorded the highest number of sector risk assessment downgrades this quarter. The global economic downturn is also expected to keep on showing a dichotomy between manufacturing sectors experiencing difficulties, and services being more resilient, notably in leading economies. This includes the United States, where Coface anticipates a significant economic slowdown, with GDP growth forecasted at 1.3% in 2020 down from 2.3% the previous year, in the context of the fading knock-on effect on companies’ investments of the sizeable corporate tax cut (from 35% to 21%) put in place by the Trump administration in 2017, alongside the concerns of companies on trade uncertainties. China’s economy is also forecasted to continue its slowdown, with a GDP growth expected at 5.8% in 2020, down from 6.1% last year, still impacted by both the trade uncertainties as well as challenges due to the on-going rebalancing of its economy towards a consumption led one rather than exports and investments driven.

In this context, corporate insolvencies are expected to rise by 2% globally in 2020 (similar to 2019) and in a majority of countries for which these forecasts are produced (21 countries out of 26) and in all regions considered.

In this tricky and volatile environment in which economies face headwinds, four country assessments are downgraded (Colombia, Chile, Burkina Faso and Guinea), while six are upgraded (Turkey, Senegal, Madagascar, Nepal, Maldives and Paraguay).

It is worth noting that small, low per capita income economies, barely integrated with global trade, are relatively less exposed to the aforementioned developments. Despite their vulnerabilities, they have benefited from improved domestic macroeconomic policies, as displayed by the risk assessment upgrades for Madagascar and the Maldives (D to C), and to a lesser extent Senegal (from B to A4), whose economy is should benefit from brighter prospects, thanks to recent discoveries of oil and gas, on the back of solid growth performance since 2014, and a strong track record of political stability. 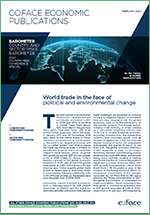