In 2017, Germany overtook France to become Europe’s leading supplier to the African continent. While France’s trade balance has remained in surplus (apart from in 2008 and 2012, when oil prices reached all-time highs), its market share of exports to Africa halved from 11% in 2000, to 5.5% in 2017. This loss concerns all key export sectors, with the exception of aerospace. Nevertheless, according to the recent analysis conducted by Coface, there are 27 African countries that could represent a potential rise of around 21% in exports.

The slump concerns capital goods, the automotive sector and pharmaceuticals

The erosion of France’s share of exports to Africa is part of the more widespread deceleration of French exports globally (which fell from 4.7% in 2001, to 3% in 2017). To a lesser extent, Italy, the UK and the US are following a similar trend in terms of exports to the African continent. Unsurprisingly, China has seen a rapid increase in its market share (from 3% in 2001, to around 18% in 2017), followed by India, Turkey and Spain.

The weight of French sales to Africa is falling in all key sectors, with the notable exception of theaerospace sector,which is continuing to post good performance (market share rose to 33% in 2017, up from 12% in 2001):

A potential gain of 21% for exports to 27 countries

Coface’s analysis indicates that there is a potential gain for French exports to Africa (in value terms) of around 21%, which would allow it to regain a market share equivalent to the pre-crisis levels of 7%. This is mainly linked to the fact that French export levels are below potential in 27 of the 53 countries analysed, and specifically in: 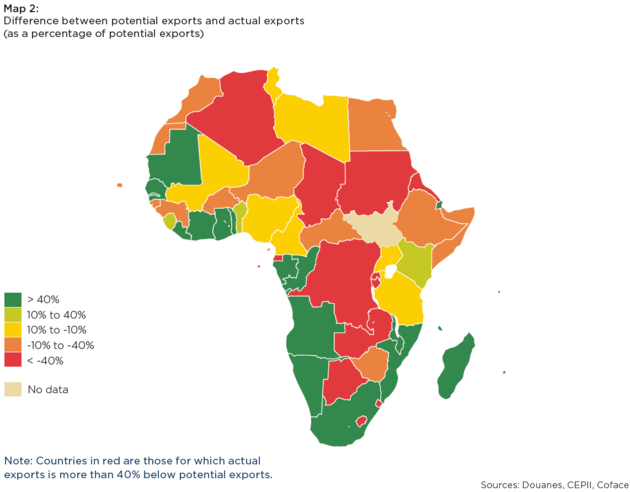 In certain African economies that share neither the same language, nor the same legal system, French exports exceed the levels estimated by Coface’s model. This is the case for South Africa, Namibia, Ghana, Angola, Kenya and Nigeria. These results suggest that factors other than those included in the model are having a positive impact on French exports to these countries. 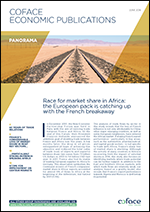