According to the International Energy Agency, natural gas has experienced the highest growth rate in consumption of all fossil fuels since 2006. Natural gas demand will continue to grow, mainly due to the increase in demand in Asia, and in particular in China, whose "Blue Sky" policy imposes strict air quality objectives and a mandatory switch from coal to gas.

Gas is recognized as a practical means of producing energy because of its abundance, versatility and lower pollution than other fossil fuels. Compared to coal, natural gas emits 40% less carbon dioxide (CO2), particulate matter (PM2.5), sulphur dioxide (SO2) and nitrogen oxides (NOx). Natural gas is the energy source most often used to complement renewables, such as solar panels and wind farms, which are often intermittent and require fast and reliable backups.

Natural gas is also integrated into industrial processes, particularly as a raw material for petrochemicals, through the ethane route. Natural gas and related liquids account for about 29% of all fossil fuels used in the chemical industry.

Although natural gas emits fewer emissions than oil or coal when burned, it is by no means a clean energy source and will not reduce the risk of global warming. In addition, shale gas extraction is highly polluting and requires large quantities of water, and the injection of chemicals into the soil to break up the rock. This fracking technology also pollutes tap water, threatening access to safe drinking water in rural communities.

In addition, renewable energies are now becoming more affordable than natural gas. According to the latest energy cost analysis (LCOE) of the international finance company Lazard, unsubsidized wind energy is already competitive with the cheapest method of producing electricity from natural gas. And it should not be forgotten that natural gas prices are very volatile, adding uncertainty to the decision-making process.

Finally, the use of gas as an adjunct to electricity production from renewable energy sources is probably in its final stages, given the technological advances made in electricity storage. According to the Wood McKenzie design and energy firm, electricity storage capacity in GW/h more than doubled in 2018, increasing by 140%. Car manufacturer Tesla is already testing a battery storage system in Australia linked to the Hornsdale wind farm. Although the technology is still in its infancy, many players and governments are eager to develop their own battery storage champions like Sweden's Northvolt, which aims to become the largest European battery manufacturer.

Natural gas still has a bright future ahead of it, but in the longer term its future is more than threatened, leaving room for energies that are better able to contribute to saving the planet. 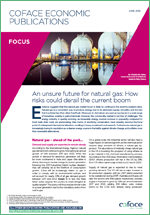