In the last three decades, the UAE has developed into the second largest and most diversified economy in GCC area through the implementation of specific policy frameworks regarding regulations, investments, trade barriers and restrictions allowing the expansion of the private sector. Between 2000 and 2017, the share of oil revenues in total budget revenues declined by 7 pp to 53 %. Exports of oil and oil products declined to 16 % of total exports in 2016 against 76 % in 2000. Exports of plastics, wood and paper, precious stones, cement, transportation products and metals increased over the period.

Despite these positive outcomes, the UAE still does not seem to have integrated global value chains (GVC); only fuels, metals, minerals and stones rank, representing a very small portion of the manufacturing sector, are integrated. This situation is preventing UAE companies from implementing a production process across different countries, resulting in limited integration in GVC despite the country’s continuous economic and trade diversification efforts.

The Belt and Road initiative: a source of benefit and risks

UAE has signed various agreements with many other economies in trade and investment, favouring China, also due to the Belt and Road Initiative (BRI) launched in 2013. These agreements could boost commerce and investments and allow the country to access wider markets, especially regarding construction, metals, trade, logistics and hydrocarbon sectors.

The value of bilateral trade between the UAE and China reached USD 52.7 billion in 2017, up 15 % against the previous year. Non-oil trade volume stood at USD 3.5 billion while imports reached USD 31.9 billion. The UAE’s main exports to China are currently aluminium ingot, chemical fertiliser, petroleum, and polytene, while imports mostly target textile goods, apparel, metal products, machinery and electronics. In 2018, within the BRI, the volume of non-oil trade between China and the UAE is expected to rise to USD 58 billion as the initiative would give the federation the opportunity to enforce its regional hub position for exports and investments. Overall, the UAE and China have already signed 13 agreements and memoranda of understanding in several segments allowing the UAE to attract more investments from China, which is not currently ranked among the top 10 foreign direct investors of the federation.

However, several concerns still arise over BRI. The geopolitical instability and political tensions experienced by many countries involved in this initiative could impact the UAE in the event of widespread regional crisis. At the same time, the Chinese economy slowdown could also weigh on UAE industry, as this would drag down the demand for UAE oil and petrochemical products. Moreover, any US additional protectionist measures against China, in the current trade war, could negatively impact the UAE’s trade and logistics sectors. 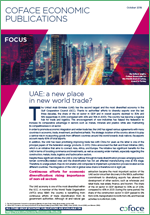