A decline in profitability

Forced to comply with this new technological situation and consumers' desires, car manufacturers are investing massively in redesigning their vehicles, subsequently increasing their production costs.

Furthermore, the arrival of many new players – such as Google Waymo, Tesla, Arcfox or Aiways – adds an additional degree of uncertainty to a market that was used to a certain stability, or even had a tendency for concentration via mergers, acquisitions, and co-investments.

These stricter rules have notably led to bottlenecks for car manufacturers, with delayed approvals leading to a shortage of models available at dealerships. Customers were therefore forced to delay their purchases, directly impacting the number of new registrations (-23.5% in September 2018).

In addition to these technical and administrative barriers, there has been a negative trend in consumer sentiment in the eurozone since the beginning of 2018. This is discouraging consumers from buying new vehicles, especially as incentives to switch to greener energies dry up.

The US market is also affected by lower demand (-1.1% at the end of October 2019, over 10 months, particularly for sedans and other cars, although surprisingly stable for SUVs, pick-ups and other light trucks). This trend continues to affect car manufacturers’ activities, with the closure of several factories in the country.

Finally, the Chinese market is severely affected by the drop-in demand (-4% in October 2019) partly due to a certain wait-and-see attitude from consumers, who are waiting for the tax incentives announced by the government. This is in addition to the effects of the trade war between China and the United States.

In addition, large municipalities such as Beijing, Shanghai and other similar cities impose strict license plate limits for new cars every year. Chinese households are therefore turning massively to the sale of second-hand cars.

Difficulties that affect the entire ecosystem

Naturally, the growth and revenues of automotive suppliers are severely impacted by this slowdown. The rationalization of production costs and technological developments linked to the environmental constraints imposed on car manufacturers subsequently have repercussions on the entire supply chain. This is particularly true for R&D expenditure. This may lead to mergers and acquisitions in order to rationalize these costs, which are necessary to bring decisive technologies to market – again leading to a redesign of the automotive industry landscape. 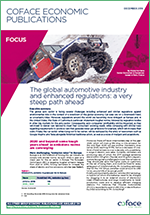