Turkey’s economy recorded substantial growth during the first three quarters of 2017, up by 7.4% compared to a year earlier. This was achieved despite the series of shocks which occurred in the country in 2016. During the third quarter of 2017, the economy expanded by 11.1% from a year earlier – the fastest pace among all G20 economies. Growth has mainly been driven by government support, higher investments, export growth and the recovery in private consumption.

One of the biggest boosts to the economy was the increase in the size of the Credit Guarantee Fund (CGF, with which the government supports small and medium-sized companies) to nearly $64Bln (250Bln Lira). The CGF effectively makes the State a “guarantor” for credit applications.

Investments also grew, increasing by 7.9% in the first nine months of 2017 (2.7% in the same period of 2016). Overall investments were led by a 12% jump in construction investments during the third quarter and most importantly by an increase of 15.3% in machinery and equipment investments (a leading indicator of increasing production capacity). Private consumption recorded a solid increase, particularly where durable goods were concerned. This reflects the positive impact that overall tax cuts on products, such as white goods and furniture have had on the economy.

Exports of goods and services, which rose by 13% y/y during the first three quarters of 2017, also strongly supported the economy. The contribution of trade to GDP growth stood at 1.4 pp for the first three quarters. The recovery in Europe is continuing to boost Turkey’s export performance. Production performed well, with an acceleration in manufacturing and construction activities, as did the services sector.

Within this positive environment, growth in private consumption is expected to be sustained during first half of 2018. Moreover, the forthcoming presidential and parliamentary elections in 2019 may encourage the Turkish government to introduce new measures towards the end of 2018, in order to support economic activity ahead of the polls.

External vulnerabilities should be taken into consideration

Despite these positive forecasts, Turkeys’ structural lack of savings will continue to represent the largest menace to the national economy. The government’s CGF programme has encouraged banks to lend and thus pushed the banking sector’s loan to deposit ratio up to 125% during second half of 2017. Besides affecting banking risks, this situation also accentuates challenges related to exchange rates, making Turkey more vulnerable to currency volatility and dampening investor sentiment. These factors could limit foreign direct investments over the coming years.

Turkey’s exchange rates problem is linked to the funding of its current account deficit, as this is largely financed by short-term capital inflows. If foreign direct investments which are relatively low were to contract, Turkey would become more reliant on short-term capital for financing its external gap. This would increase the country’s dependence on global financial investors and intensify its vulnerability to exchange rate shocks.

Among other potential challenges, Turkey should beware of rising interest rates on banking loans, as this represents an important risk for the dynamics of investment in the country. The high levels of interest rates the country has reached could hamper cash flow management in the corporate sector and negatively affect business enthusiasm for new investments.

Against this economic backdrop, inflation is likely to continue to increase, due to the weakness of the Turkish Lira against the US Dollar and the Euro. The depreciation of the Lira against these two currencies since September is likely to put upward pressure on inflation, both in terms of consumer and producer prices. Higher prices and taxes hikes coupled with a weaker lira could also weigh on private consumption, by reducing purchasing power. 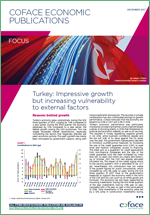