The shock could be even more violent in emerging economies: in addition to managing the pandemic, which will be more difficult for them, they are also facing the fall in oil prices, as well as capital outflows that have quadrupled compared to their 2008 levels.

Companies’ credit risk will be very high even in a “best-case” scenario, where economic activity gradually restarts in the third quarter of the year, and there is no second wave of the coronavirus epidemic in the second half of 2020.

This trend in business failures would affect the United States (+39%) and all the main Western European economies (+18%): Germany (+11%), France (+15%), United Kingdom (+33%), Italy (+18%) and Spain (+22%). The shock could be even more violent in emerging economies: in addition to managing the pandemic, which will be more difficult for them, they are also facing the fall in oil prices, as well as capital outflows that have quadrupled compared to their 2008 level.

The risks weighing on the forecast of a 4.3% decline of world trade in volume in 2020 are downward, as the numerous border closure announcements are not taken into account in Coface's forecasting model (model based on oil prices, shipping costs, confidence of manufacturing companies in the United States, and Korean exports as explanatory variables).

In the longer term, the COVID-19 crisis could also have consequences on the structure of global value chains.The main source of companies’ vulnerability in the current context is their heavy dependence on a reduced number of suppliers located in a few, or even a single country. Therefore, increasing these numbers to anticipate possible supply chain disruptions will now be a priority for companies.

Most sectors affected, although some are spared

For businesses, the sudden confinement measures taken by governments in more than 40 countries to stem the expansion of the COVID-19 virus, representing over half of the world's population, have had immediate consequences.

These measures have resulted in a supply shock unlike any observed during previous major crises. The initial shock was not due to a financial crisis, but related to the real economy: people cannot work, and companies are experiencing disruptions to intermediate goods supply.

Tourism, hotels, restaurants, leisure, and transport are badly affected, as are almost all specialised distributions segments and most of the manufacturing sectors (excluding the agri-food industry). Other service sectors have been much less affected: telecommunications, water, and sanitation, to name a few.

Accompanied to this supply shock is an equally brutal demand shock. Many consumers are cancelling or postponing their expenditure on goods and services. In addition, household confidence is being weakened by the impact of confinement.

Durable consumer goods such as vehicles will likely be among the most punished by this shock. Other expenses, such as textiles and clothing, as well as electronics, are also likely to be reduced to almost zero.

At the other end of the spectrum, the consumption of agri-food and pharmaceutical products might actually benefit from this exceptional situation.

The most obvious consequence of the pandemic in the short term is the exacerbation of existing geopolitical tensions.

The risk of a new wave of protectionist measures, targeting particularly the key sectors of the new health and economic order (e.g. limiting exports of agri-food and/or pharmaceutical products, deemed vital) cannot be excluded. The continuation of the US-China “trade war” targeting strategic sectors, notably electronics, also remains a possibility. This could be reinforced by the presidential campaign in the United States, and/or by the event of rising in social protests in one of these two countries. 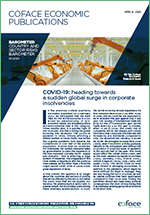