Companies in France: fewer business insolvencies, but still just as many “zombies”

The number of corporate insolvencies in France has continued to decline at the beginning of 2018: -8.3% year-on-year to end of January. This good performance takes place against the backdrop of stronger growth in 2017 (to 2%).

While all sectors benefited from buoyant activity and recorded a decline in business insolvencies, the construction sector performed best, contributing to half of the total decrease recorded. Other sectors – such as services for private individuals, automotive, and clothing - continue to benefit from firm household consumption at the start of this year, driven in particular by the fall in the unemployment rate (8.6% in the fourth quarter of 2017, after 9.3% in the third), a low interest rate environment, and high levels of confidence.

All regions have benefited from this improvement, including Île-de-France, which had recorded four consecutive years of rising company insolvencies. While micro-enterprises saw their situation improve, larger companies posted even stronger performances, reducing the cost of insolvencies, both in financial and employment terms.

The number of insolvencies should continue to fall throughout the year: Coface forecasts a decline of 3.6% in 2018. This somewhat reduced decline will be attributable mainly to the appearance of signs that growth is running out of steam (supply constraints – hiring difficulties especially –,production capacity utilisation rate at its highest level in the last ten years), as well as delayed effects from the large number of business start-ups in recent years. Although 2018 should therefore still follow the impetus of continued recovery, it could also be a turning point, as the French economy is expected to reach a peak in the cycle, as are the other advanced economies.

Moreover, the outlook for French companies is more nuanced than may be suggested by the insolvency rate alone: despite falling significantly since the crisis, even to below its 2007 level, the rate of companies in difficulty remains just as high if we include all those that are unprofitable and insolvent. In a context of low interest rates, which encourage the use of low-cost loans as an “intravenous drip”, the proportion of “zombie” companies has in fact increased in recent years. 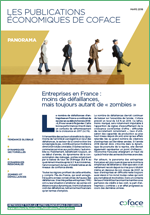