Trade wars, slowing growth in the United States (U.S.) and Europe, Brexit and volatile global capital flows — businesses in Asia had to manage a number of political, economic and financial pitfalls last year. To better understand the impact that such events have on companies, Coface conducts annual corporate payment surveys across the world. The 2019 Asia Corporate Payment Survey covers nine economies in the Asia-Pacific region. For the survey, data was collected from over 3,000 companies during the fourth quarter of 2018.

The survey’s data also highlights changes across different industries. Average payment delays were highest in the energy, construction and ICT sectors, with over 20% of companies from those sectors offering payment terms of 120 days or longer. Longer payment delays in 2018 can be largely attributed to customer financial difficulties. These difficulties are a result of fierce competition impacting margins, as well as a lack of financial resources as a result of tighter Monetary Policies in 2018.

In terms of cash flow risks, Coface’s survey considers the ratio of ultra-long payment delays (exceeding 180 days). According to Coface’s findings, 80% of ultra-long payment delays (ULPDs) are never paid. When these unpaid ULPDs constitute more than 2% of annual turnover, a company’s cash flow may be at risk. The proportion of companies experiencing ULDPs exceeding 2% of annual turnover increased from 26% in 2016 to 33% in 2017, and then to 38% in 2018. Furthermore, the survey’s results found a surge in the number of companies stating that they had ULDPs exceeding 10% of annual turnover. The increase in companies reporting ULPDs exceeding 2% of their annual turnover was highest in China, Australia and Malaysia; as well as the construction, energy and transport sectors in the region.

Weaker economic expectations for 2019 spells trouble ahead for payments

Economic expectations deteriorated quite significantly in a number of cases last year, according to the survey. Over 50% of companies in Hong Kong, China, Japan, Singapore and Taiwan stated that they do not expect growth to improve in 2019. These economies are directly and indirectly impacted by the trade war between the U.S. and China. Despite weaker sentiment, 53% of companies stated that they do not use credit management tools to mitigate risks. Surprisingly, markets with a majority of risk managers who predict the economy will not improve also feature a large percentage of companies that admitted using no credit management tools.

‘2019 will prove to be a more challenging year for companies in Asia Pacific, as weaker growth momentum compounded with an increase in cash flow risks could trigger higher defaults’ said Carlos Casanova, Coface’s Economist for the Asia Pacific Region. 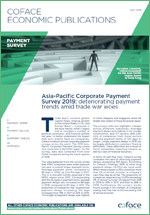