Country and sector risks barometers, April - 2018: Beyond the peak of global growth

Positive economic signs continued to accumulate in 2018 during the first quarter. There was sustained growth in investment and a situation of almost full employment in more and more countries, which encouraged households to consume more. Companies are taking full advantage of this virtuous circle and the number of insolvencies in the Eurozone and the United States is expected to fall again this year, by 7% and 5% respectively. According to Coface’s forecasts, Portugal will be the best “pupil” in the monetary union and the country has been reclassified from A3 to A2. The only downside is that signs indicating the end of this cycle are appearing. While business confidence remains buoyant in most advanced and emerging economies, it has somewhat declined. More and more companies are becoming concerned about supply constraints, such as insufficient equipment and manpower ; as well as protectionism risk.

Paradoxically, this period of sustained growth has been running in parallel with a continuingly high level of political risk. This is a sign that social discontent is still present, despite a situation of close to full employment and (albeit timid) wage growth in many countries. The elections in Italy and the various announcements of protectionist measures by Donald Trump illustrate this. At this stage, these American decisions are insufficient in scale to call into question the positive dynamics of world trade, and Coface estimate world trade growth at +3.7% this year.

Within this context of increased global demand, the prices of main raw materials are on an upward trend. Coface anticipates that the price of a barrel of Brent oil will reach an average of 65 dollars in 2018. This leads us to positively re-evaluate countries that are heavy exporters of oil, such as Nigeria (up from D to C). The credit risk of companies in the energy sector also appears to be lower in several Latin American countries, such as Brazil, Argentina and Chile. South Africa’s upgrade, from C to B, is also partly a result of this logic (in addition to the political lull). Conversely, the prices of more expensive raw materials are beginning to penalize the countries that import them (Tunisia is downgraded from B to C). Also on the negative side is the fact that Costa Rica’s country assessment has fallen from A4 to B, and Sweden’s from A1 to A2. 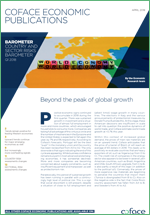