During its annual conference on country and sector risks, Coface shares with companies its vision of the major global economic trends for 2018. Three bigger risks in 2018:

Heading for a spike in global growth in 2018

Having begun with the threat of protectionism and punctuated by numerous elections and political crises, 2017 held some pleasant economic surprises. Only thirteen countries ended the year in recession, compared with twenty-five in 2016. Global trade made a spectacular leap (growing 4.4% in 2017 according to Coface forecasts, after +1.5% in 2016), while the risks associated with protectionism did not materialize: the net number of protectionist measures worldwide reached 283 in 2017 (against 374 in 2016), despite increasing in the United States.

Business was stronger than expected in the United States, Europe and several emerging countries where it was supported by the gradual rise in price of several commodities. Country assessments for Brazil (B) and Egypt (B) thus improved.

Among the winners in the acceleration in global trade were several open economies whose country assessments improved: the Netherlands (A1), South Korea (A2), Taiwan (A2), Singapore (A2) and Hong Kong (A2). Greece benefited from the return of consumer and business confidence and left category C (high risk) for B (fairly high risk).

Despite the fact that political risk remains high, Coface improved assessments for Ukraine (now in C), Moldova (C) and Georgia (B) which are enjoying good growth following the pickup in Russia and the clear recovery in Europe. Kazakhstan (B) is benefiting from increased oil production and public investment related to China's "New Silk Road" project.

In 2018, global growth could peak (Coface forecasts +3.2%). In emerging countries, the recovery is expected to be stronger (with growth of 4.6% according to Coface) and above all more synchronized. In advanced countries, the downward trend in insolvencies continues but is beginning to run out of steam (the forecast decline is only 1.8% in 2018, after a 6% drop in 2017) as many countries have already returned to their pre-crisis levels. The United Kingdom will see an increase in insolvencies (up 10% according to Coface) in a context of persistent political uncertainties. 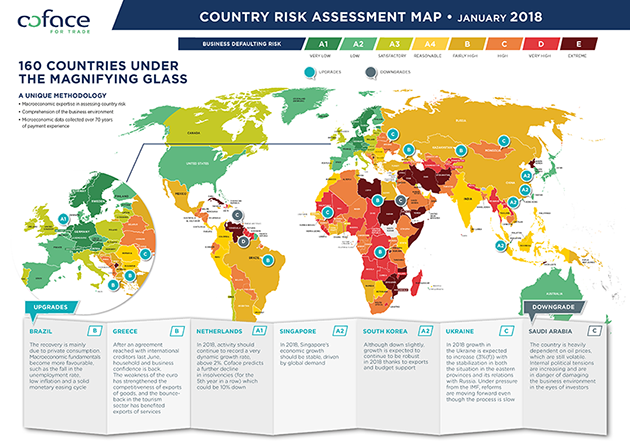 This global improvement will not be risk-free. Coface warns of three major risks:

From the second half, the issue of overheating will be particularly relevant for companies in advanced countries. Historically low levels of unemployment in Germany, the United States and Central Europe indicate that companies are close to their maximum production capacity. This supply issue is shared with French companies, paradoxically facing a labour shortage despite high levels of unemployment, which could limit their growth.

Temporarily hidden in 2016 and 2017 as a result of public investment, the structural weaknesses in the Chinese economy are resurfacing: overcapacity in steel and soaring corporate debt in the form of bank credit and shadow banking. In this context, banking risk increases significantly, especially for small and medium-sized banks.

A resurgence of political risk cannot be ruled out in 2018. Social frustrations are still high in emerging countries at the beginning of a busy election year and are accompanied by high Coface social turmoil risk index levels in Iran (71%), Lebanon (65%), Russia (64%), Algeria, Brazil and Mexico (61% each). In the Middle East, this risk is exacerbated by the volatility of oil prices. Saudi Arabia is also marked by a high level of risk in this respect (score of 65%) and Coface has lowered its assessment of the country to C.

Several sectors are picking up again, with the exception of the UK automotive industry

In order to give companies an even more thorough and in-depth understanding of global risks, Coface now assesses credit risks in 13 business sectors in 24 countries representing nearly 85% of global GDP.

2018 opens with 18 sector assessment revisions, 15 of which are positive. The metallurgy sector has the best news as a result of metal prices bouncing back. Risk is no longer considered “very high” but “high” in Italy, India and Turkey, and “medium” in the Netherlands. The energy sector is recovering in Canada (now “high risk”) and in the United States (“medium risk”) in line with an increase in production and prices. In France, the assessment of the construction sector has been revised for the second time in nine months and is now “low risk”.

The UK automotive industry is out of step with the rest of Western Europe. The first negative signs of the risk of a future hard Brexit - depressed investment, production, and sales caused by a downturn in the confidence of households and investors explain the deterioration in the sector to "high risk". 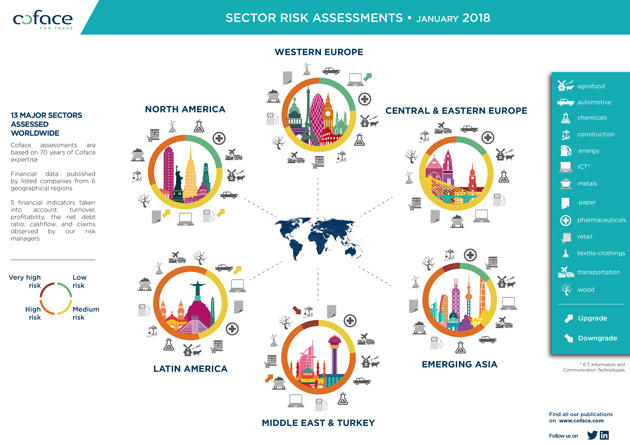