Improvements in country risk are increasingly perceptible in advanced countries, where growth is expected to rise in 2015 (+2.1%). The Eurozone, driven by Germany and Spain, records two positive changes with the Netherlands and Belgium rising by a notch. Changes vary widely in emerging countries, however (downward growth revision, to 4.2%). Brazil and Ecuador are placed under negative watch and Russia sees its business environment assessment downgraded.

Belgium and the Netherlands upgraded to A2, confirming the recovery in the Eurozone

The upward revision in the ratings ofBelgiumandtheNetherlandsto A2 follows that of Germany, Spain, the United Kingdom and Austria in 2014 and Portugal at the start of 2015. This confirms the zone's gradual return to growth (estimated by Coface at +1.3% in 2015, after +0.9% in 2014).

Household spending, exports and investments have made a positive contribution to growth in both countries. Corporate insolvencies continue to fall. In Belgium, the political landscape has become more stable, with a government focused on fiscal consolidation. In the Netherlands, the start of the year was marked by increased confidence among companies in the construction sector, in line with the rise in real-estate prices (+3.6% in January 2015 compared with their low point in 2013).

The front-runners in terms of good news areTunisia, whose B assessment is now accompanied by a positive watch, andCambodia, which has been upgraded to C.

Latin America has been severely affected by economic and political uncertainty, including the fall in commodities and the decline in Chinese demand. Venezuela and Argentina, sorely tested in 2014 by major external liquidity risks, are not the only ones affected.Brazil'sA4 assessment andEcuador’sB assessment are now under negative watch.

Following the downgrade of its country assessment to C in October 2014, Russia has again been downgraded, this time in respect of its business climate. The business environment, now at a C assessment, is poor and suffers from particularly blatant failings in terms of protection of property rights. Weak governance and corporate transparency also contributed to this downgrade, as did the sanctions put in place in 2014 which complicate companies' activities in some sectors. As a reminder, Russia is ranked 176th (out of 215), according to the World Bank's governance indicator for control of corruption, which remains a recurrent weak point. 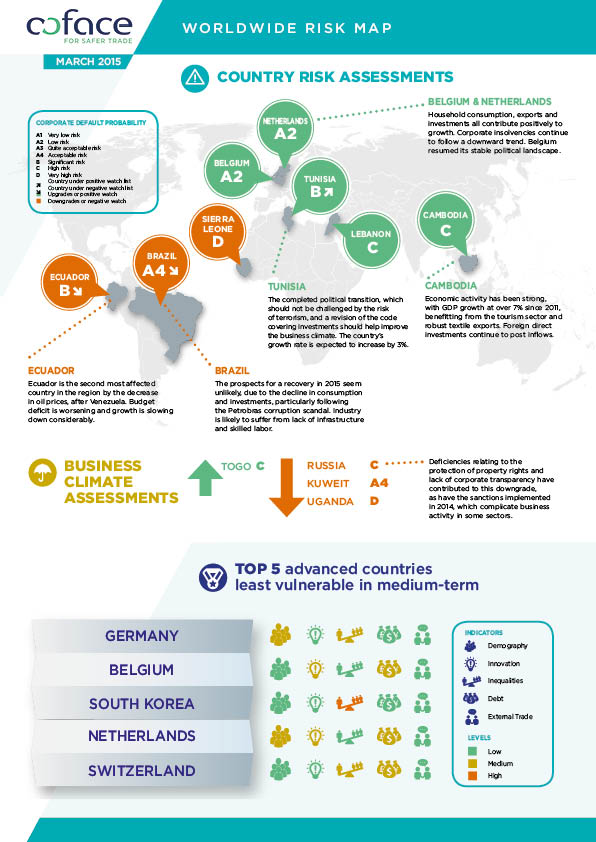