At the beginning of the year, the Finnish economy was set for a strong economic recovery in 2022, with a push from the strong growth dynamic of late 2021 and no further COVID-19 related restrictions. However, this outlook has clouded with the Russian invasion of the Ukraine and the reaction of the European Union, with several rounds of sanctions against Russia. Although the economic recovery should continue, it will now likely be less dynamic. Finland is the most-exposed Nordic country to Russia in terms of direct goods trade. While it had been noticeably higher before the annexation of the Crimean peninsula in 2014, Russia remained the fifth-most important export destination for Finland , with 5.4% of all exports going to their big neighbour. On the import side, Russia accounted for 11.9% of all Finnish imports in 2021, which made it one of its three biggest supplying countries. By late March 2022, 6.9% of all Finnish exports to Russia were affected by EU sanctions. Nevertheless, more and more companies are voluntarily reducing their trade business with Russia. On the export side, goods are diversified (manufacturing production goods as well as mining and forestry equipment) and could be sent elsewhere. On the import side, however, unprocessed fuels and lubricants accounted for 58.2% of all Finnish imports of goods from Russia. Another 39.1% were industrial production supplies, as many Finnish companies outsourced some of their production steps to Russia before importing the products back to Finland for the final stage. This production chain is now being reconsidered. Regarding Finnish energy supply, within a month, 85% of its oil imports from Russia were substituted via imports from Sweden and Norway. Its gas imports (7% of all final energy consumption in Finland) remain an issue and should be compensated via imports of Liquefied Natural Gas (LNG). Finland will also become more independent from Russia via a new nuclear power plant that entered into service in March 2022, which by July should reach full capacity and cover 14% of Finland’s total electricity consumption. Another nuclear power plant project, for which construction should start in 2023, is now on hold, as the operating company is one-third owned by a Finnish subsidiary of a Russian company. Nevertheless, while Finland is adapting fast to the new circumstances, these changes induce higher costs and probably lower profits for Finnish companies. These are also mirrored in consumer prices. In March 2022, the Finnish inflation rate reached a 32-year high of 5.8%, and should further increase until summer 2022 and then calm down only gradually. The European Central Bank is slowly reacting to this strong inflation dynamic: it is expected to end all its QE -purchases in Q3 2022 and decide a first increase of its deposit rate towards the end of the year. However, the central bankers will probably be cautious with rate hikes, as they want to calm financial markets and keep yields of European bonds low. Nevertheless, the high increase in consumer prices will erode the purchasing power of households and limit the growth of private consumption (51% of GDP). In addition, the geopolitical uncertainty will weigh on private investment growth (24% of GDP). Public consumption, which was expected to fall due to the end of the COVID-19 support measures for companies, is now set to be neutral, with higher expenditures on subsidies to cope with the higher energy prices planned as well as strong investments into defence sector.

After two years in slight surplus, Finland’s current account is set to be just about balanced in 2022. The main factor will likely be the goods trade surplus that should be noticeably lower, as exports will decrease until they adapt to the new geopolitical situation. In addition, the structural services deficit should broaden, as again more Finns will spend their vacations abroad. This is levelled out by high incomes from Finnish companies’ investments abroad, while the balance of transfer income will remain structurally negative. The public deficit will likely widen a bit due to the higher public expenditures related to the war in the Ukraine. This will slightly push up the debt to GDP ratio, which remains relatively low.

Finland could give up its neutrality and join NATO

Social Democratic (SDP) PM Sanna Marin leads a centre-left coalition with four other parties – the Centre Party (KESK), the Green League (VIHR, environmentalist), the Left Alliance (VAS), and the Swedish People’s Party (SFP, centre). Since the last election in 2019, the conservative National Coalition party (KOK), the main opposition party, has gained support and is leading the polls: after the beginning of the war in the Ukraine, their support reached 25% in late April, compared to 19% for Marin’s SDP. This is mainly because the conservatives have long tended to favour a future NATO membership, while Marin seemed more half-hearted as the debate bang, stating in January 2021 that membership was “very unlikely”. Finland is neutral, but has been a member of the European Union since 1995 and of the eurozone since its conception. However, the sentiment in the population has changed noticeably: while before the war, up to 30% of the population had been in favour of a NATO membership according to polls, this had more than doubled by mid-March, when 62% were in favour and only 16% were against it. A decision regarding this topic is expected by late June. Even if Finland decided to join the NATO, all existing member countries would have to confirm it, which would require from several months to a year. Meanwhile, Russia, preparing counter-fire, is threatening Finland and Sweden with a nuclear build-up around the Baltic Sea region, should both countries join the NATO (a step actually already taken in 2018 in Russian Kaliningrad exclave between Poland and Lithuania). The next parliamentary elections are scheduled for April 2023.

Bills of exchange are not commonly used in Finland because they signal the supplier’s distrust of the buyer. A bill of exchange primarily substantiates a claim and constitutes a valid acknowledgment of debt.

Cheques, also little used in domestic and international transactions, only constitute acknowledgement of debt. However, cheques that are uncovered at the time of issue can result in the issuers being liable to criminal penalties. Moreover, as cheque collection takes a particularly long time in Finland (20 days for domestic cheques or cheques drawn in European and Mediterranean coastal countries; 70 days for cheques drawn outside Europe), this payment method is not recommended.

Conversely, SWIFT bank transfers are increasingly used to settle domestic and international commercial transactions. When using this instrument, sellers are advised to provide full and accurate bank details to facilitate timely payment, while it should not be forgotten that the transfer payment order will ultimately depend on the buyer’s good faith. Banks in Finland have adopted the SEPA standards for euro-denominated payments.

In the absence of an interest rate clause in the agreement, interest automatically accrues from the due date of the unpaid invoice at a rate equal to the central bank of Finland’s (Suomen Pankki) six-monthly rate, calculated by reference to the European Central Bank’s refinancing rate, plus seven percentage points.

The Interest Act (Korkolaki) already required debtors to pay up within contractually agreed timeframes or become liable to interest penalties.

Since 2004, the ordinary statute of limitations for Finnish contract law is three years.

For clear and uncontested claims, creditors may use the fast-track procedure, resulting in an injunction to pay (suppea haastehakemus). This is a simple written procedure based on submission of whatever documents substantiate the claim (invoices, bills of exchange, acknowledgement of debt, etc.). The court sets a time limit of approximately two weeks to permit the defendant to either respond to or oppose the petition. In addition, this fast track procedure can also be initiated electronically for cases of undisputed claims. The presence of a lawyer, although commonplace, is not required for this type of action.

Ordinary legal action usually commences when amicable collection has failed. A written application for summons must be addressed to the registry of the District Court, which then serves the debtor with a Writ of Summons. The debtor is given approximately two weeks to file a defence.

During the preliminary hearing, the court bases its deliberations on the parties’ written submissions and supporting documentation. The court then convokes the litigants to hear their arguments and decide on the relevance of the evidence. During this preliminary phase, and with the judge’s assistance, it is possible for the litigants to resolve their dispute via mediation and subsequently protect their business relationship.

Where the dispute remains unresolved after this preliminary hearing, plenary proceedings are held before the court of first instance (Käräjäoikeus) comprising between one and three presiding judges, depending on the case’s complexity.

During this hearing, the judge examines the submitted evidence and hears the parties’ witnesses. The litigants then state their final claims, before the judge delivers the ruling, generally within 14 days.

The losing party is liable for all or part of the legal costs (depending on the judgement) incurred by the winning party. The average time required for obtaining a writ of execution is about 12 months. Undisputed claims in Finland can normally last from three to six months. Disputed claims and the subsequent legal proceedings can take up to a year.

Commercial cases are generally heard by civil courts, although a Market Court (Markkinaoikeus) located in Helsinki has been in operation as a single entity since 2002, following a merger of the Competition Council and the former Market Court.

Enforcement of a Court decision

A judgment is enforceable for fifteen years as soon as it becomes final. If the debtor fails to comply with the judgment, the creditor may have it enforced by a bailiff, who will try to obtain an instalment agreement with the debtor, or enforce it through a seizure of assets.

For foreign awards, since Finland is part of the EU, it has adopted enforcement mechanisms applicable to court decisions issued by other EU members, such as the EU Payment Order and the European Enforcement Order. For judgments issued by non-EU members, the issuing country must be part of a bilateral or multilateral agreement with Finland.

Finnish law provides no specific rules for out-of-court settlements. Negotiations between creditors and debtors are made informally. If an agreement is reached, it must still be validated by the court.

The goal of restructuring is to allow an insolvent company to remain operational through administration, with the view that if the company is able to continue its business, it will be able to repay a larger part of its debts than would have been possible in the case of bankruptcy of the company. The commencement of these proceedings triggers an automatic moratorium, providing the company with protection from its creditors.

The board of directors maintains its power of decision but the receiver is entitled to control certain aspects of the company’s operations, including the creation of new debts and overseeing transfers of ownership.

When debtors are unable to pay their debts when due and this inability is not temporary, they are placed into liquidation. Upon acceptance of a liquidation petition by the court, the debtor is declared bankrupt. A receiver is appointed, and a time limit is established for any creditors to present their claims. The receiver then establishes a proposed distribution scheme, whilst creditors supervise the selling of the estate and the distribution of the sales’ proceeds. 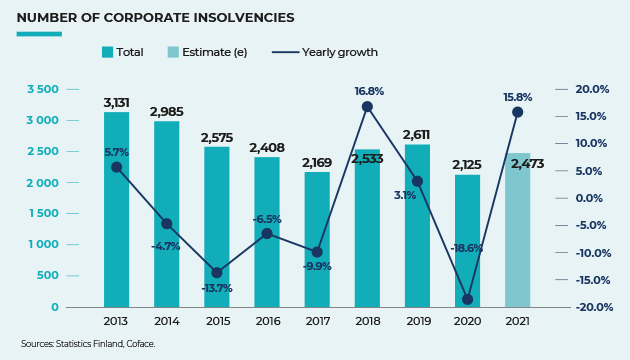