"Coface delivered a strong first quarter: the effects of our Fit to Win strategic plan are now fully visible. Our revenues grew by 6.7%, driven by positive net production and past client activity growth, while maintaining our disciplined underwriting. Combined with rigorous cost controls, this growth allowed a significant reduction in our cost ratio. Our loss ratio remains close to the record low levels we achieved a year ago, in a less favourable context. Over the quarter, the annualised return on average tangible equity reached 9.0%, the objective of our Fit to Win strategic plan.

The year 2019 is an important one for Coface. We are maintaining our goal of filing our Internal Model this summer and are continuing discussions with the regulator.

Finally, by acquiring SID - PKZ, Coface is concluding its first acquisition in more than a decade. This demonstrates our renewed ability to grow, including through acquisitions."

The Board of Directors of COFACE SA examined the summary consolidated financial statements for the first three months (non-audited) during its meeting on 24 April 2019. The Audit Committee, at its meeting on 19 April 2019, has previously reviewed them. 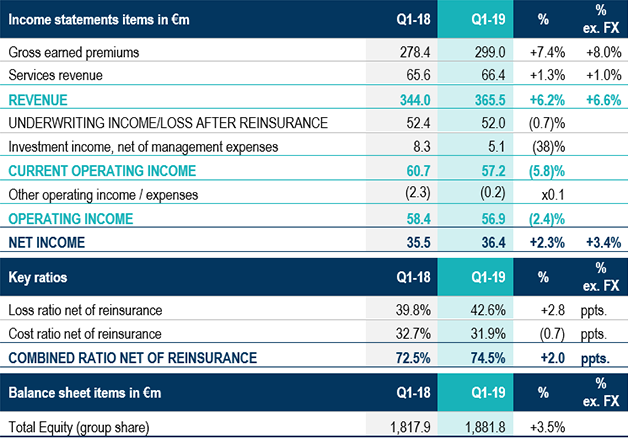 Coface recorded a consolidated turnover of €365.5m in Q1-2019, up 6.7% at constant FX and perimeter compared to Q1-2018. On a reported basis (at current FX), revenues increased by 6.2%, mainly due to the slight strengthening of the Euro against other currencies in which the Group transacts.

Coface’s clients’ activity had a positive impact of +1.3% during the quarter. This figure marks a slight slowdown compared to the previous year (+ 2.0%), but is in line with long-term trends. Pricing is still negative at -1.2%, but the extent of the decline is narrowing (compared to -1.9% for Q1-2018). This is mainly due to price increases in the United Kingdom and a lower price decline in Germany.

Client retention, at 94.0% for the Group, remains high in all regions. New business grew by 8.4%, to reach €34.9m. This was mainly driven by large contracts in Western and Northern Europe.

Revenues from other activities (factoring and services) rose by 1.5% (at constant FX) vs. Q1-2018. This was particularly supported by higher revenues for information services in Western, Central and Northern Europe.

In Northern Europe, turnover rose by 1.5% compared to Q1-2018 (and by +1.7% at constant FX). The decline in factoring revenues was mainly offset by increased revenues from credit insurance (+ 2.3% at constant FX).

In Western Europe, turnover increased by 0.1% and decreased by -0.3% at constant FX. Growth in the credit insurance business was offset by the weakness of Single Risk within a context of prudent underwriting (Brexit).

In Central and Eastern Europe, revenues grew by 0.2% and by 2.1% at constant FX. Credit insurance premiums continue to grow, despite very strict risk control – particularly in Poland.

In the Mediterranean and Africa, a region driven by Italy and Spain, turnover rose by 5.4% and 6.8% at constant FX. This was supported by continuing strong sales and positive clients’ activity.

In North America, turnover increased by 14.9% and by 7.0% at constant FX. Despite the impact from FX, the Group has been able to stabilise its portfolio. Client retention has also improved.

Emerging markets are returning to steady growth. Sales in the Asia-Pacific region were up by 28.2% and by 20.7% at constant FX. Client activity in the region is showing positive growth and the continuation of strong commercial performance. Latin America rose by 30.7% and by 53.0% at constant FX. These figures were supported by the signing of large international global contracts and by lower premium refunds. A large number of contracts is written in international currencies (mainly USD). An elevated FX volatility leads to a higher growth rate. Adjusted from this, growth rate would be +28.8%.

The gross loss ratio stood at 39.8% for the quarter, representing a minor rise of +0.1 ppts compared to the record low level achieved last year. The Group's reserving policy remains unchanged. The rigorous management of past claims enabled the Group to record 33.8 points of recoveries on previous years. The loss ratio was impacted positively due to recoveries on highly reinsured facultative business.

The loss ratio net of reinsurance for the quarter was 42.6%, up 2.8 points vs. Q1-2018. The greater increase in the net loss ratio is due to recoveries recorded on highly facultative business.

Coface is continuing its policy of strict cost controls and investments. Over the one-year period, costs rose by 3.0% (2.7% at constant FX). This rate of growth represents less than half of the increased rate recorded for revenues. This operational leverage reduces the net cost ratio by 0.8 ppts, to 31.9%.

Operating income for the first quarter was €56.9m, representing a slight decrease (-€1.5m) compared to the previous year. This was mainly due to lower net financial income.

These evolutions are mainly due to the positive net income of €35.5m and the rise in unrealised capital gains on equities and bonds (lower interest rates) recorded directly in equity.

Coface maintains its scenario of a gradual slowdown in economic growth and an international environment that will remain complex. The first quarter did not provide the anticipated clarifications over Brexit, which pushed back the timeframe for resolving uncertainties. Although central banks have returned to a more accommodating tone and China has announced a stimulus package, the outlook in Europe remains contrasted.

Within this context during the first quarter, Coface benefited from its investments in risk management. Despite the environment of increasing uncertainties, claims remained under control.

The group has also achieved stronger sales momentum, without loosening its underwriting displine.

Coface is maintaining its objective of filing its Internal Model in the summer of 2019. Discussions with the regulator are continuing.

The presentation will be available (in English only) at the following address:

[2] The proposed distribution is subject to approval by the general shareholders meeting on 16th May 2019.