Business proceedings aimed at insolvencies and restructuring have been on rise in Poland this year. Over the course of the first three quarters of 2017 they increased by 14% compared to the same period last year.

Most of the sectors in Poland experienced an increase in the number of proceedings. In contrast, the country’s macroeconomics have been performing well. GDP growth strengthened to 4.0% y/y in the first half of 2017. Economic activity is being driven by household consumption, which remains the main growth engine.

Household consumption has benefitted from a further fall in the unemployment rate, which has broken previous record lows. Polish households are also enjoying fair growth in wages and the lowest central bank interest rates in history. Unsurprisingly, within this positive economic environment, consumer confidence indicators are high.

Slowly, but gradually, fixed asset investments are becoming more evident and are positively contributing to Polish growth. After last year’s contraction (due to a switch to the new EU budget), investments have started to be fuelled again by infrastructural projects and increasing business capacities.

As a result, domestic demand - along with stronger exports supported by strengthening global trade dynamics - is secure enough to keep Poland’s GDP growth at solid levels over the following quarters. This positive economic activity will continue to support companies in Poland, but the first signs of an overheating economy (such as supply constraints and labour shortages) will bring challenges for companies and the pace of expansion. Coface forecasts that GDP growth will reach 3.9% this year, before weakening to 3.5% in 2018.

The favourable macroeconomic environment has been supporting Polish businesses. The cross-sector average shows that, during the first half of 2017, companies were able to generate both higher revenues (+9.6%) and profits (+5.4%). Nevertheless, profitability indicators have not been overly impressive. The intense competition present in many sectors is hampering attempts to increase margins, despite growing demand and revenues.

The retail sector is an illustration of this trend. Although retail has been benefitting from increased consumer spending, the sector experienced a 59% increase in insolvencies and restructuring procedures during the first three quarters of this year. 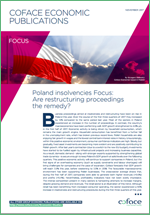